It took me some time to make up my mind on how could I present a personal view of the Igorots as required in our subject ‘Communication and Culture’. Being an FBI (full blooded igorota), from Fidelisan, Sagada, Mt. Province, it’s quite difficult to arrive at a fair view of ‘a group of people which has experienced and maybe still experiencing some sort of discrimination which is being passed from generation to generation through oral and written communication.

The main objective of this exercise is to do our role as development communicators in creating public knowledge and opinion on the culture of the Igorots most specially for our lowland brothers and sisters who got their first orientation from history books being taught in school.

To start with, we have to review our past more than three hundred years ago when
the tribes of the Cordillera-often collectively known as the Igorots (“mountaineers”)- resisted assimilation into the Spanish Empire. Although they brought some material improvements, such as the local diet, the colonizers forced the poor to pay off debts, burned houses, cut down crops and introduced smallpox. The saddest long- term result of the attempts to subjugate the Igorots was subtler, the creation of a distinction between highland and lowland Filipinos. The peoples of the Cordillera became minorities of their own country still struggling today for representation and recognition of a lifestyle that the Spanish tried to discredit as unchristian and depraved. The word Igorot was regarded as derogatory in some quarter although in the 20th century, there were moves to ‘reclaim’ the term and it is still commonly used. (www.roughguides. com/igorots)

In many references, a common definition of the word “igorot” is an acronym derived from Austronesian term for “mountain people” (formed from the prefix i-“dweller of” and golot, “mountain range”) (Wikipedia).

Others say that “igorot”, is the collective name of several Austronesian ethnic groups in the Philippines, who inhabit the mountains of Luzon. These highland peoples inhabit all the six provinces of the Cordillera Administrative Region: Abra, Apayao, Benguet, Kalinga, Ifugao and Mountain Province, as well as adjacent provinces (Wikipedia).

There are olden stories about the Igorots that we hear from our forefathers until today, and these can be featured in the following quotes and photographs:

The Igorots are Head Hunters

“During the colonial times, the fiercely independent mountain tribes resisted foreign invaders and were never fully conquered. As head hunters they were feared by their enemies for their ferocity in the battle. The Igorots however are peace-loving people who value their freedom and their way of life.

The Igorots were a warlike people before the majority of them were Christianized. A tribal war usually starts after a tribesman takes the head of a member from another tribe. Head taking was a rite of passage into manhood.

The offended tribe can demand retribution. If the one taking the head desires continued peace, influential tribal leaders are sent to the other tribe to negotiate. Compensation is paid and the accord is sealed with an exchange of articles. If no agreement is reach then a war challenge is issued by the offended party.

Nearly all men from both sides will participate in the battle within a few days. They will appear at an opportune place shouting challenges at each other. Peace is still possible at this stage if one party decides to capitulate. A member is sent to the other camp with a peace offering usually a pig or a chicken. Friendship is restored if it is accepted. Else, if not all hell breaks loose.

Albert Ernest Jenks in his book “The Bontoc Igorot” published in 1905 has a vivid description of Igorots in the heat of battle. “Men go to war armed with a wooden shield, a steel battle axe and one to three steel or wooden spear. It is a man’s agility and skill in keeping his shield between himself and his enemy that preserves his life. Their battles are full of quick and incessant springing motion. There are sudden rushes and retreats. Sneaking flank movement to cut the enemy off.”

“The body is always in hand, always in motion. That it may respond instantly to every necessity. Spears are thrown with greatest accuracy and fatality up to thirty feet and after the spears are discharged. The contest if continued is at arms length with the battle axe. In such warfare no attitude or position can be maintained except in the shortest possible time”.

“Rocks are often thrown in battle and not infrequently a man’s leg is broken or he is knocked senseless by the rock. Whereupon he loses his head to the enemy unless immediately assisted by his friends.”

Such battles, lasting about 30- minutes to an hour often ceases after the taking of a single head by either side. But there were cases where fights last for half a day and a dozen or more heads taken.

Head hunting in the Cordilleras at present (https://hubpages.com/literature/headhunters-of-the-cordilleras)

Head hunting ritual continues with a wooden substitute for a real human head, attempts to achieve the cosmological benefits of agricultural fertility without the violence long since outlawed by national law.

Among the Kankana-ey, the “Dongtoy” ritual is a head hunting rite held every ten years or so (with a substitute head) in order to ensure the fertility of the rice crop.

The last trophy heads cut off by Igorot head hunters of the Cordilleras was suspectedly in the late 70’s.

At this point, I would like to emphasize and confirm that the head hunting practice of the Igorots as featured above is a thing of the past. We could openly say that at the present times, there are no longer head hunting sprees heard even from the most fiercest tribe in the different provinces of the Cordillera.

The concept of ‘Cultural Relativity’ (Communication and Culture, Bagano) may be applicable to the Igorots centuries ago considering their resistance to colonization; that bringing home a human head is a proof of bravery, and a symbol for manhood, etc., but now, time has changed. We are in the so-called peace time and the relevant culture now is adherence to the teaching of Christianity and the rule of law.

As said, there are aspects of culture that needs to be forgotten because these can no longer help in the attainment of development.

Another distinction of the Igorots that is particularly found among the Kalingas is the olden practice of the “bodong’ system which lives until today. The bodong is the most admirable and efficient Kalinga institution. It is a peace pact or treaty between the tribes, wherein the Pagta or laws on inter-tribal relations are made. The bodong is also the Magna Carta of the Kalingas (Kalinga people; en.wikipilipinas.org).

The Bodong System of Kalinga/https://images.search.yahoo.com/search/images 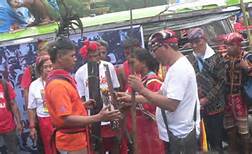 In one of our trips to Tabuk City, Kalinga sometime August 2016, with the purpose of conducting a seminar on Human Rights and Related Laws to members of the Tabuk City PNP, we met Ms. Alma Sandra Uyam, Chair of the Tabuk City Anti-Illegal Drugs Coordinating Task Force who organized the activity. In her sharing, Ms. Uyam, who introduced herself as a member of the Tinglayan, Kalinga tribe said that one of the factors why there is not a single drug-related killing in the province of Kalinga is the bodong system. The Kalinga people particularly if you are a binodngan (member of a tribe), are very careful not to hurt someone who belongs to another tribe because this can lead to tribal war/conflict which is more bloody.

At the present administration’s ‘war on drugs’ program, the bodong system of Kalinga is instrumental in the prevention of drug-related killings among the Kalinga tribes.

On the outset, I support the Kalinga Bodong system though I’m not a member of the Kalinga tribe because of its effectiveness in alternative dispute resolution.

In a study conducted by Rudolf T. Vecaldo, Romeo C. Clemente, and Agustin Y. Tamangen entitled “Effectiveness of Bodong as an Alternative Dispute Resolution: A Glimpse of Kalingas’ Peace Framework” , it states that:

Bodong, a peace pact, evolves from the customs and traditions of the
Kalingas. It discloses indigenous people’s cultural identity, heritage and
integrity that were painstakingly developed with the passing of the time.
This study investigated the effectiveness of bodong as an alternative
dispute resolution that reflects the peace framework of the community in
dealing with crimes and tribal-related offenses in the province of Kalinga,
Philippines.
The Igorot Tradional Practices (igorotvideosongs.blogspot.com)

“Until now, the practices surrounding death like during wakes, our way of offering animals, food and wine are still living examples of the Igorot tradition. In order for us to have peace of mind and not to be concerned about any bad omens, we perform the rituals, the way it had been performed and advised by the elders.”

This student goes with the above citation. Just on May 21, 2017 (Sunday) we were gathered at the house of our auntie at Banig, Tawang, Benguet for the observance of a “senga” (party) for our uncle who joined his creator a year ago. This kind of senga is called “lapsag”, meaning the last ritual for the dead among i-Sagaga wherein one pig is butchered together with a number of chicken. Like all the other “senga” performed during the wake, the dimension of the pig’s bile is studied by the elders; that this should show a desirable interpretation.

On my part, attending this kind of social obligation nowadays is sometimes less priority most specially if you have some other important things to do; but we are always advised by our parents and elders to show adherence by being present to the occasion. By the way, when we go to the “senga” it is a practice that we bring with us a bottle or two of soft drinks and bread or hard drinks for the men and “etag” (smoked meat) for some who knows to make “etag”. These food stuffs brought in are served for everybody’s consumption during the senga. For our circle, this is a form of bayanihan which lessens burden of the host family on food preparation.

As an advantage, this traditional practice serves as a reunion because all members of the clan are obliged to appear at the “senga”. It becomes exciting because the it’s the time where elders see the young and new members of the clan. 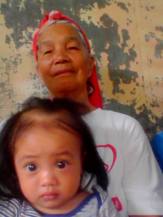 Relatives at all ages gather during the ‘senga’ for the death of a family member.
The Igorot Name

Lastly, a living tradition of the Igorots that I could share is the use of an Igorot name. Like me, my Igorot name is “Tagaypa” which is taken after my paternal grandmother’s name. As to the meaning of my Igorot name, I was not told about it. My friends jokingly interpret Tagaypa in Filipino which means “tagay pa”(drink more liquor). The wisdom behind the giving of Igorot name is for us not to forget the names of our forefathers. Whenever a baby is born in the family, the parents, grandparents or other elders from the clan come after the other to give an Igorot name for the newly born.
Summary

The Igorot culture is so diverse that we could not comprehend everything. Maybe, what was presented in this sharing is only a touch of the surface of these intricate practices because these are the observable ones.

A basic characteristic of culture is that ‘Culture is transmitted from generation to generation’ (Communication and Culture, Bagano, BSU-OU). With respect to the Igorot Culture, again the objective of this written communication is to widen people’s awareness and understanding on the Igorot’s way of life and to contribute to the material culture to be passed on.

https://hubpages.com/literature/headhunters of the cordilleras, Convention of Igorot Warfare

https//images.search.yahoo.com, The Bodong System of Kalinga.

4 thoughts on “THE IGOROTS THEN AND NOW”